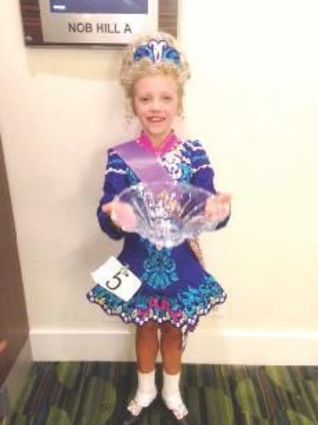 Third-grader Nuala Dougherty has been working hard, and it’s paying off.

The eight-year-old recently took fourth place in the regional competition for Traditional Irish Dancing wearing her dress that was custom-made in Belfast, Northern Ireland.

“I pretty much love it because it’s fun,” Nuala said. “And there are a lot of cool steps. I love it. I got fourth place, it was amazing.”

Nuala’s mother Melanie said that she started almost two years ago, and has made a lot of friends in the process.

“She likes the studio,” Melanie Dougherty said. “She loves her teachers and her friends there. And she moved up the grades fast, by October she was moved up to a class with typically older students. She also has friends on the teams she’s in.”

The regional placing qualified her to go to the national competition held in July in New Orleans. However, dancers need to be at least 10 before they can qualify for the world competition.

Nuala is a student of the Moriarty-Moffitt School of Irish Dance in Longmont. Owners and instructors Jennifer Moriarty and Susannah Ruehlen have had a studio in Colorado since 2009, but moved to Longmont about a year ago.

“We have dancers that come just for the fun and exercise,” Ruehlen said. “Then we have dancers who are more on the competitive side. That really is what Irish dance is about these days.”

Melanie said that shortly after starting, Nuala was asked to compete.

“She saw a video of some Irish students on YouTube,” Melanie said. “She said ‘mom, I want to do that.’ I thought ok, and looked into it. It just happened to work out that the schedule worked well and the studio is here in town.

“My mindset was just to take her and give it a try. She did try ballet before, and didn’t like it as much. So we took her up there.

“I think by the third time she went, they asked if she wanted to compete. I thought they were kidding, there’s no way she was ready. But she was, and did great.”

Traditional Irish dancing is no easy task. Dancers usually start with “soft shoe” before moving on to “hard shoe.”

The dancer keeps their arms to their sides or behind the back, and the goal is to bend the knees as little as possible.

“It’s very athletic,” Ruehlen said. “It’s changed a lot in the last 10 or 15 years. Dancers are much more athletic and can do more moves without using their arms.

“It’s different compared to other forms of dance. Ballet is also very athletic of course, but another difference in Irish dancing is that you can’t bend your knees very much.

“All of the power, height and momentum to get off of the ground has to come from a dancer who is barely bending their knees and not using their arms. The power comes from the legs, ankles and feet. A lot of forms of dance use the whole body.”

Many would be familiar with shows like Lord of the Dance or Riverdance, but Ruehlen said that they aren’t quite the same as the traditional dance.

“Traditional Irish dancing is a very old form of dance,” Ruehlen said. “Things like Riverdance would be like comparing The Nutcracker to traditional ballet. It’s more a modern form.”

Dancers at the Moriarty-Moffitt School start as early as four, and can go all the way up to adults.

Championships, called “Oireachtas,” and competitions called “Feis” can be found all over the area. Ruehlen and Moriarty host one every year in February. Both soloists and teams can compete.

The Dougherty’s also have a 14-year-old son, Denis, who is currently active in hockey. Between games, practices and competitions, Melanie and her husband Dennis stay on the go.

“It gets pretty busy I’d have to say,” Melanie said. “There is a lot of commitment with the competitions. There are also a lot of opportunities for practice during the week. But we juggle that with her brother’s hockey.”

Moriarty-Moffitt School of Irish Dance will be holding some “try it out” camps in the coming weeks. The cost is $25.

For the Dougherty’s, Melanie said that she is happy Nuala found something she enjoys and is succeeding at.

“I think it’s a really great way for kids to get exercise,” Melanie said. “You don’t have to compete if you don’t want to. If you want to just dance, you can do that too. But competitions are how they move up.”