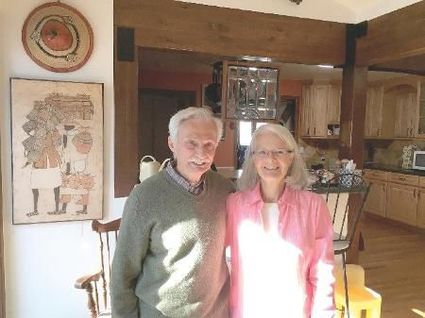 Photo by Jeremy Jaeger Eb and Debbie Roell in their Heatherwood home. The couple has travelled the world, making it their mission to do what they can to help others. Roell recently wrote a book about their experiences.

Looking back at a life of service to others, a local man has decided to share his life in print.

“I wrote the book because I thought we had a story to tell,” said Eb Roell.

The book is Piercing the Night, and the story is of the years Eb and his wife Debbie spent living and working in Uganda, amidst the chaos left behind by the infamous dictator Idi Amin.

Eb was born in Frankfurt, Germany in 1939 and immigrated to the U.S. in 1962; first to Colorado Springs, and then eventually to Estes Park, where he owned a small business, an arts and crafts shop.

It was an arrangement that allowed Eb to indulge his love of travel, operating the shop during the months of the tourist season, and traveling during the rest of the year.

“How would you like to go on a honeymoon around the world?” That’s how Eb fashioned his marriage proposal to Debbie, at the end of their second date.

Debbie didn’t say yes right away, but soon decided it was an offer she couldn’t refuse.

During the course of that honeymoon trip, hitchhiking through west Africa in the mid-1970’s, Eb and Debbie experienced a calling.

“It was a combination of love for the place and the people, and then the tremendous needs,” says Debbie.

“We saw a lot of poverty and we wanted to get involved,” adds Eb.

The Roells bought their home in Heatherwood (the same home they live in today) in 1977. Their son, Karsten, was born in 1978.

Soon after, in connection with an organization called World Relief, they traveled to the Netherlands, where their daughter Misha was born in 1980.

Shortly afterwards they found themselves in Uganda.

Eb sums up the principle of his mission work there with a quote from Samuel Moffett:

“There’s nothing quite so crippling to evangelism and social action as to confuse them in definition or to separate them in practice.”

Or as Eb himself put it, “It’s not just about being ‘holy’, the important thing is getting your hands dirty—getting involved.”

Digging latrines, delivering mail; there was no shortage of work.

Eb also ran what he called his “Revolving Loan Fund,” a kind of micro-loan program which he funded out of his own pocket.

But the chaos of the post-Amin era wasn’t just fertile ground for mission work.

“Our time in Uganda involved a lot of danger,” says Eb. Abandoned arms depots were looted, guns were everywhere, random checkpoints manned by men armed with assault rifles were on all the roads.

Eb says several friends of his, Ugandan natives, were murdered. Debbie and the two children relocated to Nairobi for long periods when it seemed that life in Uganda was too unpredictable.

In all they spent seven years in Africa, before finally returning to Colorado and their house in Heatherwood in 1987. 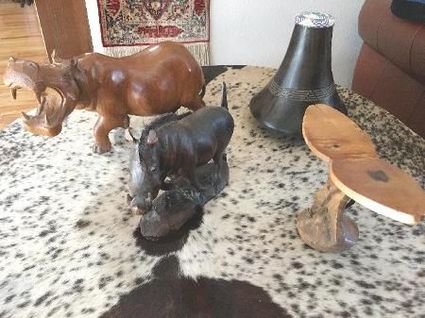 Photo by Jeremy Jaeger A sampling of the Roell’s treasures from around the world. These items are displayed in their home, mementos of their travels over several decades spent overseas.

“By that time we were tired out,” says Debbie, and it was time to come home.

Eb started up a painting business, and as it prospered the Roells found the freedom to continue their travels.

Eb has been to 130 countries, Debbie to over 100, and their home is decorated with the treasures they picked up along the way.

The book includes appendices which tell the stories of some of these other excursions.

But it was their time in Africa—seven years spent raising two small children in a strange country, a beautiful and inspiring, but also unpredictable and dangerous place—that clearly stood out when Eb retired and decided to put pen to paper. Eb lives at 4494 Aberdeen Pl., and he invites you to “Come by the house and pick up a free copy of the book!”