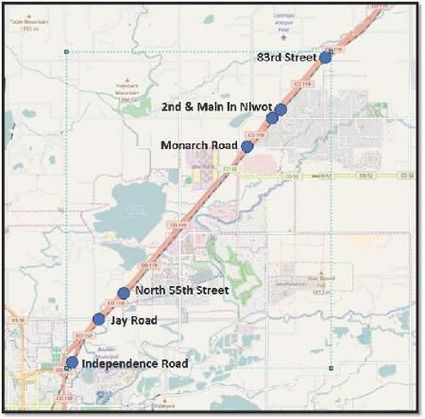 Courtesy Photo This map shows the proposed seven locations that could potentially become “quiet zones” along the SH 119 corridor. The county has received a grant to fund some of the upgrades, and is seeking public opinion to decide which ones will have the most benefit. The City of Boulder is evaluating the 63rd Street crossing in Gunbarrel as well.

The Boulder County transportation department is starting a series of public meetings regarding Quiet Zones along the Highway 119 corridor between Independence Road in Boulder and 83rd Street just north of Niwot.

Niwot Elementary School at 8778 Morton Road will be the site of the Dec. 7 meeting from 6:30 to 8 p.m. Note that the regular Niwot Community Association board meeting is cancelled for that evening.

Andrew Barth, communications director for the county transportation department, said this initial meeting is just the beginning of the process.

“We’re really just starting the public portion of this whole project,” Barth said. “We’re going to show the draft of the report, talk about our options at each crossing and what the cost would be.”

The county has received a $1.4 million grant from the Denver Regional Council of Governments (DRCOG). There is also a $350,000 match from the county itself. The City of Boulder also received a grant of just over $1 million and has matched $264,000.

According to the Boulder County website, “The improvements and funding are an element of the FasTracks program for the Northwest rail corridor. Quiet Zones are safety improvements to roads that cross railroad tracks and, when implemented, eliminate the requirement for train horn use at those crossings.”

The county initiated a study with a consulting agency to look at all of the crossings along the corridor. It has narrowed the project down to seven possible quiet zones.

With public input, the county is hoping to narrow down the scope to what the grant will actually support.

“So depending on the level of quietness you want, you can ramp up your efforts to do either quiet them down a little bit in some spots or a lot at other crossings. It’s going to be tough to make those dollars stretch. That’s what we’re trying to do, get the biggest impact from our dollar.”

They will continue to gather input from residents and send that to the consultants as the project moves along.

“That’s what we’re taking out to the public right now,” Barth said, “to get their feedback on what they would like to see, and to give us specific information on crossings near them — nobody knows an area like the people that live there.”

The county will continue studies of its own to figure out which crossings will be included. Barth said that residents will likely not see any construction until 2018 or as late as 2019.

For now, the feedback from the public will help with the selection and prioritization process.

As for the implications of the actual work, Barth said it’s too early to anticipate any effects on traffic through the corridor.

“We won’t know for sure until we select which crossings will go in with new safety improvements,” Barth said. “But there probably will be some delays with the construction. I don’t think we’ll have to close anything, you do one side of the road at a time. It’s not a significant thing like tearing up the tracks. This is upgrading the infrastructure around the tracks.”

Louisville and Lafayette also received grants for quiet zones, and as of now this project has nothing to do with FasTracks implementing a rail transit system.

Criteria that will be used to determine which sites are selected include safety, number of people living and working nearby, street characteristics, costs & implementation feasibility, opportunities to use existing resources and public/private partnerships.

Barth said that for the potential quiet zones that do not get included in this project, there is a chance they will be considered again in the future.

“This comes up every year,” Barth said. “We hear from residents in Niwot and Gunbarrel, this is important to them. It is always on the table for discussion for future budgeting, but we don’t have anything earmarked right now beyond the total $1.7 million.”

The standards set by the Federal Railway Association for trains sounding their horns at crossings are between 96 and 110 decibels for a minimum of 15 seconds and a maximum of 20 seconds.

For more information go to bouldercounty.org/roads/plans/pages/quietzones.aspx, or on the City of Boulder’s site at bouldercolorado.gov/transportation/rrqz.