Niwot Football gives up nine touchdowns in loss to Loveland 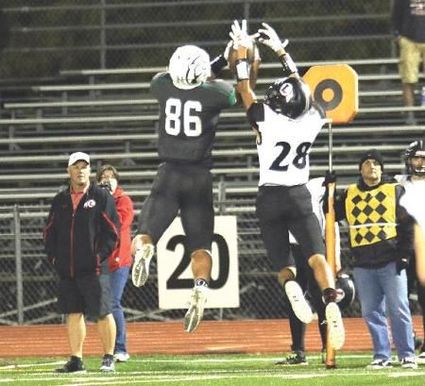 Photo by Ed Navarro Niwot’s Alex Oelsner (86) goes up for a pass against Loveland.

“Loveland showed up to play a game and we did not,” he stated bluntly. “We have a lot of things to fix this week.”

There was no single culprit in the Cougars’ meltdown against the 8th-ranked Loveland Indians. Pressed all night by a speedy Loveland defensive line, the Cougars’ offense struggled to make first downs or even move the ball out of their own territory.

On the other side of the ball, Niwot’s defenders were simply powerless to stop Loveland sophomore running back Zach Weinmaster, who amassed 245 yards and five touchdowns on the night, while Loveland receivers were consistently left wide open.

On special teams, no Niwot returner made it past the Cougars’ twenty yard line, but Niwot kicks were repeatedly returned to mid-field or better.

“By no means is Loveland that much better than us,” Hollingsworth said, “but we sure made them look like it.”

Loveland scored on its fourth play, less than two minutes into the game, when Weinmaster ran it in from 44 yards out. Then they scored on their fifth play, when Weinmaster again scored, this time on a 53-yard run. When Loveland scored again on just its eighth play, with 4:37 still to go in the 1st quarter, it was clear the game was already out of reach. Loveland’s sixth touchdown of the half, which made the score 42-0 with just a minute remaining, activated the running clock rule for the remainder of the game.

For Coach Hollingsworth, this loss did not provide his team with a valuable learning experience nor did it have a hidden upside.

“This isn’t a game where you can point to one thing and say, ‘We did that ok,’” Hollingsworth admitted. “Our kids just weren’t prepared mentally when they walked on the field.”

To be fair, there were a few bright spots for the Cougars. The offense, helmed this week by Senior quarterback Trae Gomez, turned the ball over just twice, down from six turnovers the prior week. Gomez connected with senior Chris Jensen and junior Matt Baun on long passes. The Cougars’ defense did make it into the Loveland backfield a few times, with Jensen and junior Shane Timmerman recording tackles for a loss.

But it was nowhere near enough. Loveland would go on to score three more touchdowns in the second half, winning by a final score of 62-0. With the win, Loveland moves to 6-1 on the season.

“We just need to move on from this, and start looking forward to next week,” Hollingsworth said.

Unfortunately for Hollingsworth and the Cougars, the light at the end of the tunnel may just be another approaching train. Or two. Next on the schedule is the Broomfield Eagles, who beat Loveland on Oct. 7. Broomfield is 5-2 on the year, and was ranked fourth in the Oct. 10th CHSAA Poll. On Oct. 15, Broomfield lost to Greeley West, which Niwot will face on Oct. 29.

“Mental preparation is going to be a big key of what we do this week,” Hollingsworth explained. “And making sure they’re ready to take the field on Friday. We’ve got two very good teams coming up in the next two weeks in Broomfield and Greeley West. We’ve got to get our stuff together.”