BVSD ballot measure 3A to fund maintenance and more 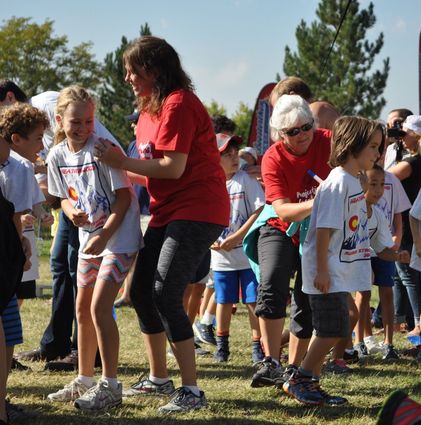 Photo by Jennifer Simms Heatherwood Elementary School students (from left) Sam Kantorovich, Claire Arveson, Diego Lehman, Zachary Simms and Irene McCalmon get their fun run laps counted on their t-shirts by parent volunteers (from left) Stephanie Arveson and Sally Doyle during the third annual Husky Hustle fundraiser. Heatherwood raises money each year to fund para-educators and to purchase technology, which helps to make up for shortfalls in the Boulder Valley School District budget.

In November, Boulder Valley School District (BVSD) will be asking voters to approve an operational mill levy, ballot measure 3A. Though the ballot language states the levy would support the district’s ongoing construction, technology and maintenance expenses, the school district envisions it as a way to provide for much more.

Since the State of Colorado began cutting education spending during the recession in 2009-2010, using a legislative maneuver called the negative factor, BVSD’s funding has been reduced by a total of $202 million over the past eight years.

“Because of the shortfall in the state budget, we need to create our own funding,” Heatherwood Principal Gena Jaramillo explained to parents at a recent PTO meeting. “This [mill levy] would free up money to do other things in the district.”

As specified by Colorado House bill 13-54 passed in May, funds raised by the mill levy would support a portion of the district’s $33.4 million ongoing annual technology and maintenance expenses and allow the district to invest in preventative building maintenance and facility repairs. In addition, funds freed up from these maintenance budgets could be used elsewhere in the district to provide improved student services.

For example, thanks to the voter-approved 2014 bond, BVSD is in the process of building additional classrooms to host full-day kindergarten district-wide. But since the bond only funds construction, additional money from the mill could be used hire the 64 teachers needed for these new classes. Funds could also be used to reduce the student-teacher ratio, or restore staffing and resources cut by the negative factor.

For Jaramillo, one major benefit of the mill levy could be the addition of elementary counselors. “As an elementary school, we have no counselors,” she said. “Mental health is huge at this age. As much as I can, I help when needed, but I’m the principal, no one wants to confide in me. It’s a totally different feel when you have someone with a title in the office to facilitate the conversation.”

The estimated impact of the mill levy on taxpayers in year one would be $14/year per $100K of actual property value. “The board has discretion to increase the amount collected by no more than one mill per year in years two-four up to the maximum [of four] mills” BVSD Chief Financial Officer Bill Sutter explained, with the maximum impact in year four estimated at $32/year per $100K of actual property value.

Heatherwood PTO president Bert Prospero admits the language of the mill levy may sound boring. “No one gets excited about the maintenance budget. We get excited about hiring more teachers,” Prospero said to parents and PTO board members. “People need to know what [the district] really wants to do with the money.”