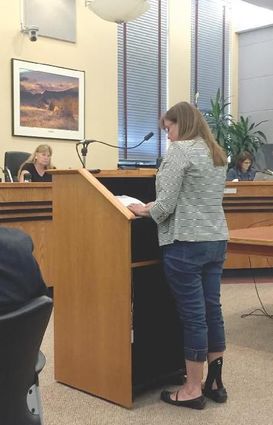 Boulder County Commissioners approved the proposed marijuana establishment in Niwot on Thursday, June 30, after holding a public hearing on June 29 to hear from opponents and supporters.

After hearing from Boulder County Land Use Department staff on the application, the commissioners heard from members of the public who voiced approval for the pot shop, and those who expressed concerns regarding traffic and parking, home property values, safety and more.

“This is not a vote whether marijuana is right or wrong, where it should be allowed or where it shouldn’t be allowed,” Michael Bosma, agent for the applicant, said about the issue. “This is a by right use in this zone and we feel that the application has met the criteria for approval.”

Applicant Ernie Craumer, of Colorado Real Estate Holdings LLC, sat by as many came to the microphone to voice their opposition to the commissioners. Julie Baldwin, who has been a Niwot resident for over 20 years, said her main concerns are parking issues, home property values and the safety of the town.

“Our community, Niwot, is a peaceful, safe place to live now,” Baldwin said. “That is rare and I want it to stay that way… The proposed marijuana shop would also attract harder drug users and addicts to our small town.”

Baldwin expressed her concerns surrounding the safety of Niwot after bringing up the recent fatal shooting of an armed guard at a marijuana dispensary in Aurora. Baldwin emotionally expressed her worries of her home’s property value, after experiencing economic downturns.

“I don’t own a multi-million dollar home,” Baldwin explained to the commissioners. “I don’t even own a half a million dollar home. I was barely able to buy my little house in Niwot 21 years ago. As a single wage earner, I managed to keep my house through a divorce and a long recession when everything went up, except my paycheck. After all that work, I’m counting on my home’s property value for retirement.”

Baldwin fears that if the marijuana retail store opens in Niwot, it will negatively affect home property values, which she said friends of hers have already experienced.

Niwot resident Bob Bankston also spoke in opposition to the proposed marijuana retail store. He cited Niwot as being a family-oriented town with many events, which the marijuana store would be in close proximity to.

“I’m opposed to this facility being approved,” Bankston told the commissioners. “It doesn’t fit the nature and character of our neighborhood and town whatsoever. Niwot is a small town of only 4,000 people; a town that still holds Fourth of July parades, Halloween parades, Christmas parades…”

Those in favor of the proposed marijuana shop said they believe there is a need for this in the community that is not being met otherwise. Diane Zimmermann, who lives and works in Niwot, expressed her feelings about Craumer and his family, stating he is a “sound business-man.”

“I made it a point to get to know Ernie Craumer and his family over the past two years,” Zimmermann said of the applicant. “I wanted to know who he is and what his intention was in coming to live and own a business in Niwot. I’ve come to realize he’s a good man who wants to make a legitimate investment in our town and will improve the dispensary property above and beyond what he is required to do.”

Jim Eastman, a Niwot resident who is heavily involved in the town, voiced his support to the county commissioners, explaining a marijuana store is needed in Niwot because otherwise he has to travel to Boulder to get the medicine he needs for his kidney disease.

“There is a need for this type of product in the Niwot area,” he said.

Eastman continued to speak to the fear of underage kids obtaining marijuana, saying it’s the parents’ responsibility to teach their kids about the dangers of drugs and alcohol, and keep them out of their reach.

The county commissioners came together the next morning on June 30 to deliberate, share final thoughts and make their decision in front of members of the public.

Commissioner Cindy Domenico explained this has been a tough issue for them, since the people of Colorado voted to legalize marijuana in 2013. Ultimately she said that as commissioners they have to stick to the Boulder County land use codes.

“Our job is to see whether this application matches up with the code that’s in place, [and] that governs this subdivision in this particular site,” Domenico explained. “We’ve heard a lot of people[’s] concerns about it, and we find ourselves needing to play the role in this quasi-judicial setting of matching up the code.”

Deb Gardner, county commissioner, echoed Domenico’s statements, saying it’s clear what direction they need to go in with their decision.

“The decision is really more about the use of that particular property being retail or personal services,” Gardner said. “The question of whether it’s marijuana, or a grocery store, or restaurant really is not part of what’s in our decision-making today.”

County Commissioner Elise Jones shared her thoughts on the issue after thanking the public for all its input. She said their job as commissioners isn’t always easy and straightforward, especially when they don’t have the authority people assume they have.

“When you’re in a quasi-judicial setting, like we are with this land use docket, [there] are things you don’t get to do,” Jones explained of their decision. “What you do is interpret the code consistently, based on what the code says.”

Jones, Gardner and Domenico voted unanimously to approve the docket, with the hours of operation the planning commission recommended of 10 a.m. to 7 p.m. They also stated that after 18 months the applicant can submit to change the hours through a minor modification process, which will be based on “successful operations in terms of compatibility with the neighborhood.”

“We’re excited about the approval—the process worked it out,” Bosma said of the outcome. “We’re very thankful of staff, planning commission and county commissioners’ decision to approve it.”

Steve Romano, spokesperson for No Pot in Niwot, said this hearing does not mark the end of the marijuana situation for Niwot.

“As our attorney told the commission at yesterday’s public hearing, this is an abuse of discretion,” Romano stated. “The decision ignores Comprehensive Plan language specifically protecting Niwot and overwhelming local opposition. We’ll be meeting soon to discuss [the] next steps.”

Niwot resident Julie Ankenbrandt didn’t believe the commissioners acted in the best interest of the community members when they made their decision.

“Why have the planning commission or the commissioners at all if they are there to rubber stamp land use’s interpretation of the code, regardless of resident outcry and opinion?” Ankenbrandt asked. “The code does not exist independent of [Boulder] County’s residents; it exists to protect and serve them, and when it doesn’t, it needs to be amended as needed, not enforced.”