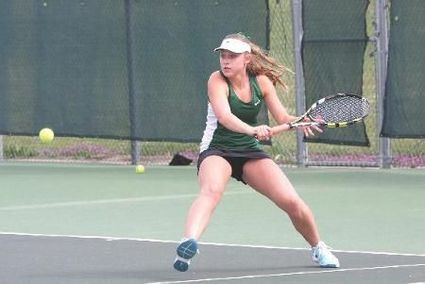 It would seem that spring break was beneficial to the Niwot High School girls tennis team, as the Cougars rolled off three straight match wins against Thompson Valley, Silver Creek and Mountain View in the first week back.

In fact, the Cougars only dropped two matches while winning 19 in the past week, showing that they are settling into form as the season draws to a close.

Niwot Head Coach Aimee Keronen said her team will continue to improve as long as they can keep getting on the court.

“It’s important for us to get as much time on the court as we can,” Keronen said of her team’s preparation. “We need to just keep playing and keep practicing, especially on the doubles side.”

Thompson Valley was their first match back from the break and the Cougars showed they were ready to get back on the court and compete, defeating the Eagles 6-1 on the day.

All three singles competitors won their matches in straight sets, led by the dominant performance of sophomore Taylor Thulson in two singles, who won her sets 6-0, 6-1.

The only drama last Monday, April 11 against Thompson Valley came in the two doubles match, where sophomores Erin O’Neill and Jewel Ng had to come back after losing the first set 4-6. They won the next two sets 6-4, 6-4 in a hard fought battle.

Keronen said O’Neill and Ng benefit from each other’s play style and sometimes just need to work on their technique.

“They both play similar, they like to go out and smack it,” Keronen said of her two doubles team. “When they can be under control they really help each other out.”

The next day against Silver Creek was the most dominant win of the week for Niwot, defeating the Raptors 7-0 despite a storm rolling in halfway through the match that brought quite a bit of wind with it.

Sophomore Julia Pentz was the top performer on the day in the singles competition, making quick work of her opponent in the one singles match 6-0, 6-1.

Keronen said Pentz and Thulson have a killer instinct when they step on the court, which translates to more success in singles play.

“You have to have that kind of mentality when you play in singles,” Keronen said.

On the doubles side, the one doubles match started fantastically for junior Amanda Duquette and senior Emma Lerner as they won the first set 6-1. Then Mother Nature reared her head and changed the landscape of the match with gusty wind, which led to the one doubles team dropping its second set 4-6. They recovered however and defeated their opponents in the final set 6-4.

Keronen said Colorado weather can be unpredictable this time of year and they need to be prepared for it.

“The wind is such an equalizer and we are a stronger team so it’s a disadvantage,” Keronen said of dealing with the elements. “Footwork is huge when it’s windy. If you get flat footed it can kill you because the ball is going to move and bounce.”

In the final match of the week, Niwot dispatched Mountain View at home 6-1, and every match they won ended in two sets.

Pentz on the singles side didn’t lose a single game in her one singles match, going 6-0, 6-0, and freshman Rachel Drake won her third straight match in three singles 6-2, 6-0.

Niwot only has one match this week, facing rival Longmont at home on Tuesday, April 19. After that the Cougars only have three matches left before the regional tournament starts.